YOLO (You Only Live Once), the first patient/carer led group in Swindon, has been launched to improve the lives of those living with dementia, and attempt to break the stigma too often attached to memory loss.

The dozen or so members have formed the 'think-thank' to bring some much-needed positivity to discussions about dementia.

“LIFE goes on – dementia is not a death sentence, it’s a life sentence,” says Sandy Read firmly﻿. "Sometimes I get angry and frustrated but I don’t dwell on it. I’m just grateful for every day.” 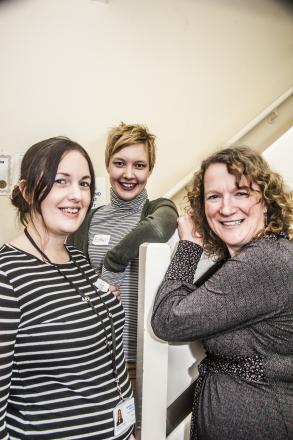 This sentiment is shared by the rest of the group, whose aims are straightforward, if daunting...
to promote understanding of dementia,
to come up with solutions to improve the lives of those affected by the condition and
to inject much needed positivity into the overwhelming sombre view of dementia.

Together they were looking for ways to put patients and carers at the forefront of dementia care in Swindon, and allow them to set the agenda for local services and charities.

​“It’s the only group in Swindon of people with dementia actively campaigning for better services.”

Dementia is an umbrella term for a set of symptoms including memory loss, difficulties with thinking, problem-solving or language and impaired judgement. It occurs when the brain is damaged, by diseases such as Alzheimer’s or a series of strokes.

Top of the agenda for YOLO is making Swindon a dementia-friendly place. This means encouraging shops, businesses and the local authority to rollout adequate signage and consider the difficulties sufferers face every day.

Most people think of dementia as affecting memory only, but it also impacts the way people perceive the world around them, including their sense of orientation, sight or spatial awareness.

“I have to have someone to go around Swindon with me because I get lost, but better signage would help,” explains Sandy, 69, who was diagnosed with dementia six years ago.

“My problem is public toilets – they tell you the way in but not the way out. I’ve got stuck many times, it’s stressful.

“What’s also dangerous is escalators. You don’t know if they’re going up or down. Better signage would not just help people with dementia but people with disabilities of any kind.”

An estimated 2,280 people are living with dementia in Swindon and nearly 7,000 in Wiltshire. As the population ages, the figure is only expected to grow over the next decade.

Encouraging a more upbeat approach to dementia – while not underrating the devastating impact of the condition – is another of YOLO’s goals.

While patients and their families face undeniable challenges, YOLO members are determined to show, through their own experience, that it is possible to lead a fulfilling life despite the relentless progression of the disease.

“I want to reassure people that although it’s not a pleasant diagnosis you still carry on,” says Harry Davis, 60, from Haydon Wick who was diagnosed five years ago.

“I believe that TV doesn’t portray the full experience. A lot of the adverts show someone who is very old sat in a chair. It doesn’t show the other side, when you’ve got early onset and you’re trying to lead as normal a life as possible.”

Lynda agrees: “It’s about changing perspective, it’s not all about loss. It’s a time like any other in your life to enjoy friendship, to experience new things. It’s a time for joy and happiness.

“We want to promote a less fearful view of dementia, and that’s where service users come into it.”

To that effect, the group will be looking to visit schools and businesses and hold talks and training sessions.

It is all part of the open dialogue YOLO is hoping to create around memory loss in Swindon.

“People don’t want to talk about it much,” says YOLO member Ana Maria Wright, whose husband Thomas, 74, was diagnosed with dementia 10 years ago.

“They think they are going to catch it, so to speak. It’s like it used to be with mental health back in the day.

“They think when you’re diagnosed your life is finished.

“It’s not easy but life goes on, when you’re diagnosed you just have to adapt to it and your family does the same.”

The ambitious group plans to meet every fortnight at the offices of mental health organisation SUNS, on Victoria Road, which the charity is allowing it to use free of charge.

While not technically a support group, YOLO is keen for people with dementia, their carers and anyone concerned they may have memory problems to get in touch.

To send your questions about dementia or memory loss to YOLO, or share your concerns about symptoms you or a friend or relative are experiencing, email swindonyolo@gmail.com or you can send a letter to YOLO at SEQOL, North Swindon District Centre, Thamesdown Drive, Swindon, SN25 4AN.​

YOLO co-founder Esther Jones, who works at the Forget Me Not Centre in Park South, says: “A lot of the services are quite reactive, by the time people come to Forget Me Not, for example, they have quite developed symptoms.

“It’s about being proactive and almost preventative in a way by raising awareness of how to live well with dementia before it’s progressed.

“It’s about making people’s lives easier. Your life doesn’t stop when you are diagnosed.”

The extent of the task ahead is enormous but YOLO members are far from daunted.

"I like to pick a new challenge every single day,” smiles Sandy,  “I think we can make a difference in Swindon.”