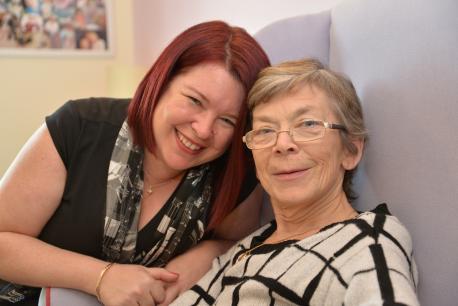 A CHAMPION has been crowned in Swindon for her dedication to a national charity and fundraising exploits.

Amanda Franks, 41, was made a champion of Alzheimer’s Research UK last month following years of stoic support for the charity’s cause as a fundraiser and spokeswoman.

Her mum, Cathy Davidson, has been living with early-onset Alzheimer’s for seven years and was only 58 when she received the diagnosis.

As a champion, Amanda joins a small but growing group of 35 people nationwide who have made outstanding efforts to help Alzheimer’s Research UK in its mission to defeat dementia.

“It’s a case I’m absolutely passionate about and do an awful lot of awareness and fundraising for,” she said.

“It’s nice to get the recognition you’re doing something good.”

The director of Frankly Recruitment in Kembrey Park said it was never something she had considered in just supporting the charity, but the penny dropped when she went away on a charity-organised course for spokesperson training.

She found, on a course with more than a dozen others, she was the only attendee not classed as a champion of the charity.

To achieve this she has enlisted the help of family and friends to organise numerous fundraising activities, including a live concert in 2014, The Gig to Remember, held at the Oasis in Swindon.

The concert featured world renowned Beatles tribute band the Bootleg Beetles and was attended by over 1,300 people.

Amanda has also shared her story with the media to help increase public understanding of Alzheimer’s disease and the impact it can have on individuals and their families.

“When you have somebody in your family with Alzheimer’s it’s so out of your control, there is nothing you can do to make it better,” she said.

“This was my way of making a difference. The future is in your own hands with your own life, but it is difficult with this disease.”

“Her motivation for raising money and awareness of our work is unwavering.

“Her efforts to help in this way are bringing our scientists ever closer to finding better forms of diagnosis, preventions, new treatments and an eventual cure for Alzheimer’s disease and other forms of dementia.

“Research has the power to defeat dementia and Alzheimer’s Research UK is leading the charge.