DEMENTIA clinic waiting times have dramatically reduced to two months after a major review into mental health services in the area.

Patients waiting for an appointment at the Victoria Centre-based Memory Services clinic, run by Avon and Wiltshire Mental Health Partnership NHS Trust (AWP), had been forced to endure a nine month waiting list before the strategic review.

In the last two months, waiting list times have been slashed bringing welcome Christmas news for the 29 people currently on the list who now have appointments scheduled for early next year. 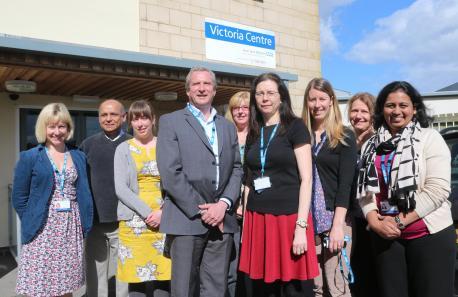 Staff from the the Swindon Memory service pictured outside the Victoria Centre at the Great Western Hospital. The Swindon service has recently slashed its waiting list time from nine months to two. Photo: Stuart Harrison

In another positive outcome for the trust, people with severe mental health conditions are now able to be treated in the local area. Previously they had been sent as far afield as London and York to receive specialist care.

Newlands Anning, Interim Managing Director at AWP said the initiative to reduce waiting times was a result of staff being moved around and the appointment of a new consultant psychiatrist.

“A complete assessment reviewed the medical input in the memory services centre and a medical assessment reduced the delay,” he said

“Resource has been moved around, and a consultant psychiatrist brought in to speed up appointment times.

AWP had increased its dementia diagnosis rate by 28 percent in the space of four months, placing it among the top four trusts in the country.

But as rates increased waiting times for appointments at their Victoria Centre-based Memory Services clinic had risen.

“We took all of that feedback on board, took it as a priority and invested and utilised all of our resources and it is really because of that that we have proved successful,” Newlands said, and added that the trust was now on course to hit a target of four weeks by March 2016.

“It looks positive, things are moving in the right direction and our projections are we will be hitting four weeks within three months," he said.

“The patient feedback has been incredible, people have been surprised. We’re dedicated to providing the best service locally as possible, despite financial constraints that trusts across the country are facing.

"All the teams across Swindon have worked phenomenally hard to focus on the pressures of accessing mental health services and improving patient flow. I am very proud of what has been achieved and that we now offer a much improved patient experience."

Phyllida Law, mother of actresses Emma and Sophie Thompson, has described the burden of caring for a parent stricken by dementia.

The 83-year-old, whose extensive roll-call includes appearances in the 1993 film version of Much Ado about Nothing and more recently as a guest star in Foyle's War, looked after her mother, Meg, for several years as the degenerative disease took hold.

In a case study for a new report from Alzheimer's Research UK, which focuses on the impact of dementia on the people who care for those with the disease, Phyllida describes the strain that caring for her Mother Meg put on her as her mother's health deteriorated.

The Alzheimer's Research UK report, "Dementia in the Family: The impact on carers", comes as new polling reveals that nearly a third (31%) of non-retired people aged 55 and over are worried that their family members will have to care for them in later life.

The report reveals how those looking after family members with dementia can become socially isolated and can find it difficult to cope.

Through interviews with four families who are living with the condition, the report explores the stress and cost faced by carers, revealing how those looking after family members with dementia can become socially isolated.

Hilary Evans, chief executive of Alzheimer's Research UK, said: "For many people the festive season is a time to think about family, but for countless families across the UK dementia is taking a heavy toll, leaving people socially isolated and struggling financially.

"The experiences highlighted in this report will be recognised by people up and down the country who are dealing with the challenges of caring for a loved one with dementia."

If we could delay the onset of dementia by five years, by 2050 we could reduce the number of carers by a third.

“A diagnosis of dementia ripples far beyond the person affected, it touches whole families, and we owe it to them to do all we can to tackle it.”

Read the full report by clicking on the link here to Alzheimer's Research UK website:

Dementia in the family : The impact on carers​