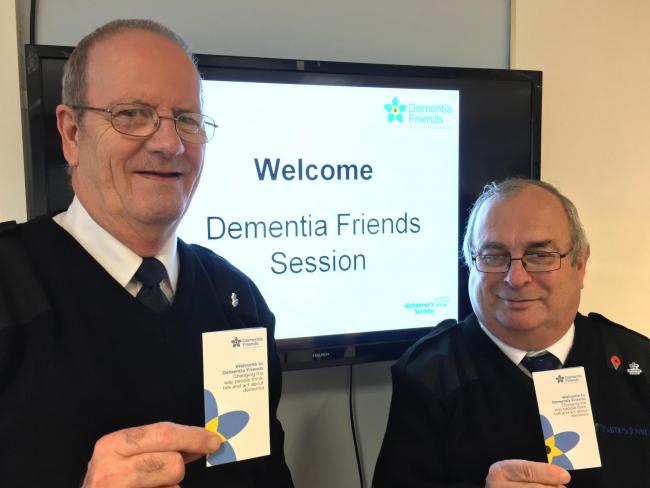 Thamesdown Transport is encouraging all its drivers to sign up to become Dementia Friends in a bid to make travelling on their buses easier and less stressful for passengers living with dementia.

The Dementia Friends initiative from the Alzheimer's Society aims to raise public awareness of the difficulties people living with dementia face, and how everyone in the community can help support them to make life a little easier.

Peter Oliver, commercial director at Thamesdown, said: “All of our drivers are encouraged to sign up to be a Dementia Friend. Having Dementia can make people feel isolated and apprehensive about going out and so our drivers can spot the signs and make getting the bus easier, whether that’s giving them the time they need to board or use their ticket, or identifying when someone might be confused due to their dementia and helping them get where they need to be.”

Thanks to the efforts of the company's driver instructors, Paul Banham and Phil Bailey, who have trained as Dementia Champions,  each bus driver will complete the dementia module as part of their customer training.

The training covers the common difficulties people with dementia experience, including memory loss, problems communicating and confusion about time and place, and what drivers should do in order to make travelling easier and a much less stressful experience.

It is brilliant to see Thamesdown Transport committing to raise awareness of dementia to their drivers and customer facing staff.

Bus drivers understanding a bit more about dementia will ease the difficulties people with dementia face, supporting them to travel and live independently for longer. This initiative is a major contribution to other work that is being developed in Swindon to ensure people with dementia are valued and included in their community.

So far 52 of the company's bus drivers have completed the training to become officially recognised as a Dementia Friend. They can be spotted by the blue flower badge they wear so why not watch out for them and say hello!