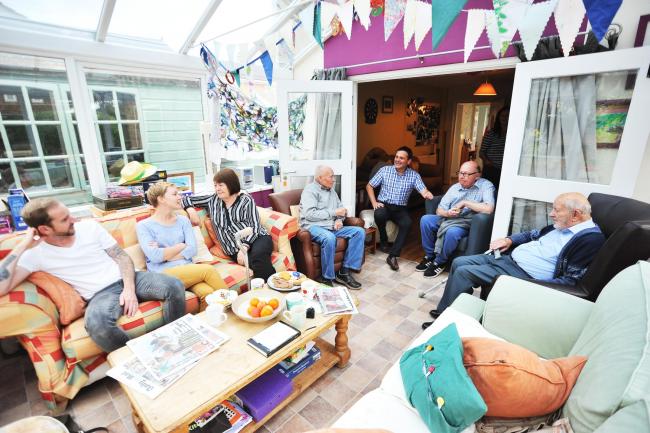 The Forget-me-Not centre in Park South has become a haven for people living with early onset dementia in the Swindon area.  Spearheading a unique approach to counteracting the progress of the symptoms of dementia, it is one of just a handful of services in the country to offer an activity focussed programme.

As the centre prepares to celebrate an incredible 20 years of service, Marion Sauvebois paid the 5 strong team a visit to find out more. Below is her article for the Swindon Advertiser...

" It began as a nomadic operation run out of car boots and community centres.

A single-minded band of carers drove the length and breadth of Swindon, lugging their own equipment around, setting up in halls and boxy meeting rooms, before packing up and zipping off again, wherever their dementia services were needed.

Encouraging patients to reclaim their lives through occupational therapy, recapture memories and, crucially, ward off the march of the condition was a unique and rather bold proposition when Forget-Me-Not was first pioneered in the town in 1996.

Now a formal centre in Park South, it marks its 20th anniversary this year. 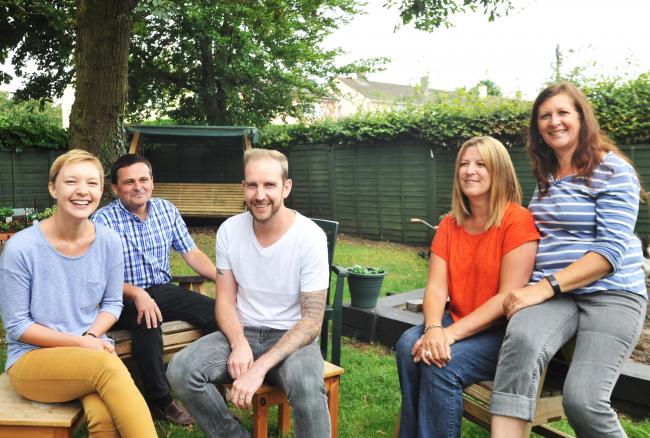 The support team in the Forget-Me-Not garden

“It has had many guises,” concedes centre manager and occupational therapist Darren Davies with a smile. “And even now after 20 years it’s still unique and revolutionary. There is nothing else like it in Wiltshire and there are very few services like it in the whole country.”

“We used to go from building to building,” recalls dementia support worker Sam Cullen, who joined the service 15 years ago. “It’s changed a lot over the years but I probably remember every single client. It’s the people who make this place.”

“It’s a shame that after 20 years, services like this are still so unusual,” adds her colleague Jan O’Donnell, Forget-Me-Not’s longest-serving support worker with 19 years under her belt.

Occupational therapy provides support for people whose health prevents them from doing the daily tasks.

Forget-Me-Not’s occupational therapist Esther Jones’s role is to identify strengths and difficulties users encounter in everyday life, whether it be memory related, going shopping alone, taking the bus, cooking, or dealing with money. This is done through a range of activities including physical exercise, domestic workshops or craft projects. The goal is to support people with early onset dementia to maintain, regain, or improve their independence by using different techniques, changing their environment, using more adapted equipment or prompt cards.

“We don’t think in terms of diagnosis, but in terms of individuals and how we can help them do the things they want and used to do,” says Esther, the only full-time member of staff among the centre’s five-strong team.

“One of the typical presentations of dementia is that people stop doing things because they lose motivation and confidence or because their families are scared or worried they might hurt themselves. So we help give them strategies and build things into their routine so they can carry on with their daily life.”

The centre, which is run by the region’s mental health services AWP, made Park South its permanent home nine years ago and currently welcomes 30 users.

Open three to four days a week, it offers users the chance to join in art workshops, take part in sports like badminton, hiking or sailing or enjoy pub lunches. Patients are also encouraged to prepare meals together. Everyone is assigned a specific task; for example shopping – especially if they struggle with disorientation – peeling vegetables or cooking. 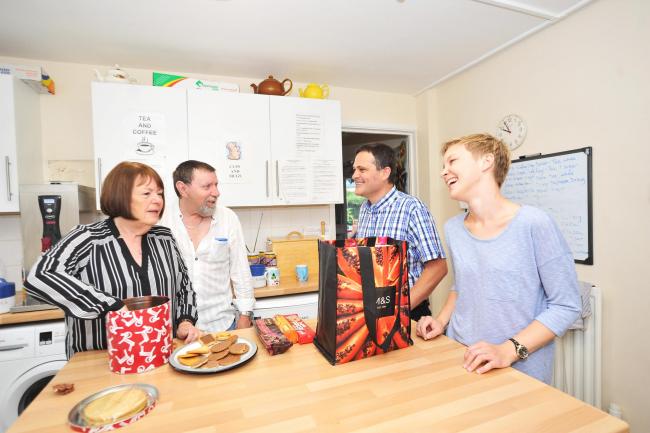 The welcoming kitchen at the Forget-Me-Not Centre

An estimated 2,280 people are living with dementia in Swindon and nearly 7,000 in Wiltshire. Dementia is an umbrella term for a set of symptoms including memory loss, difficulties with thinking, problem-solving or language and impaired judgement. It occurs when the brain is damaged by diseases, such as Alzheimer’s or a series of strokes.

Most people think of the condition as affecting memory only, but it also impacts the way people perceive the world around them, including their sense of orientation, sight or spatial awareness.

“It’s really about bringing back some normality to their lives,” says Darren. “Encouraging people to do things, and carry on with as normal a life as possible.”

Over the years, Forget-Me-Not has proved a haven for scores of dementia sufferers.

“If you get something wrong here, you’re not judged,” says Sandy Read, 69, from North Swindon, who was diagnosed with dementia 12 years ago. “But it’s so different on the street. I need extra time to think now to be able to answer questions and if I’m in a shop I soon forget where I am. I’ve been standing in front of a shop, not knowing where I was and someone saw me and called me a stupid cow.”

At the mention of the offhand insult fellow users shake their heads in unison. “I’m not surprised,” one of them chimes in.

“The companionship we get here is very important,” continues Sandy. “We support each other emotionally. Friendship here goes beyond anything we would get on the outside.”

Forget-Me-Not has also been instrumental in helping 67-year-old Roy James to rebuild his sapped confidence and pull him out of isolation following the devastating diagnosis.

“This is my family now,” says Roy, from Park South, who was diagnosed at the age of 51 and joined Forget-Me-Not six years ago. “When you get this diagnosis you feel you’re going to forget everything you know the next day. As far as you’re concerned you’re the only one who suffers with this; it’s not until you come here that you realise you’re not alone. A lot of people get very isolated after they’re diagnosed. They don’t do anything and don’t go anywhere and you lose a lot more skills quickly on your own.”

“The sooner people realise that, if we had more centres like this there would not be such a need for care homes because people would live independently longer, the better,” says Sandy.

Esther nods: “We help the health services by helping people to live independently and stay in their homes longer. It’s more cost-effective. We want to help show that activities work and help people have a better quality of life. What’s important to remember is that we’re all the same inside and we all deserve a good quality of life.”

While sufferers and their families face undeniable challenges, Roy is determined to dispel the myths surrounding dementia and prove it is possible to lead a fulfilling life for many years, despite the relentless progression of the disease.

“I’ve blown up three cookers because I forgot they were on. I’ve lost some of my skills but with determination you pick them up again. There is a life after dementia. I woke up this morning and I had a pulse. It’s good enough to get up.”

“Because you can’t do something today doesn’t mean you won’t be able to tomorrow,” reasons Sandy. "That skill isn't always gone forever."

“You just have to keep using your brain and challenging it. You try hard and you go on living well. I have.”

Article by Marion Sauvebois, first published in The Swindon Advertiser 21/09/16